Each year, the HASSRA committee based at Preston Office Centre nominates a local charity to benefit from its fundraising efforts.

For the past two years, that charity has been Caritas Care’s FX Project, which supports vulnerable young adults in the local area and our committee was delighted recently to present a cheque for £2,544.05 raised from various methods of fundraising including raffles, cake sales and scratch cards.

Staff in Preston were particularly keen to donate to the FX Project as they knew that all the money they raised was going directly to the young adults to fund their day trips and other special treats.

Martin Layton, Learning Disabilities Service Manager at Caritas Care, says: “Donations such as these go towards helping us to provide exciting and life enhancing oppor­tuni­ties as well as making fond and special memories for our young people and their families.”

The charity has been providing care and support to children, families and communities since 1934.  It changed its name to Caritas Care in 2009.

The money raised through the Preston Office Centre HASSRA branch has gone towards the charity’s FX Project which is based in Preston city centre.

From its day centre in Sedgwick Street, the FX Project provides indi­vidu­ally-tailored services five days a week through a team of Specialist Support Workers and a fully-trained nurse. It supports adults with learning disabilities many of whom have additional complex care needs.

The charity has three minibuses so the young people who are being supported can have days out in the community, at venues such as Preston’s Moor Park and the Sealife Centre.  There are also regular yoga and music sessions and a weekly disco.

Staff and some of the youngsters who attend the FX day service along with HASSRA committee members from Preston Office Centre. 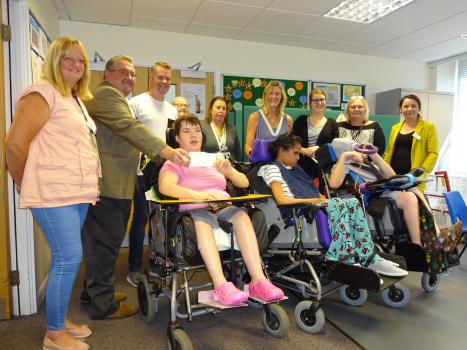